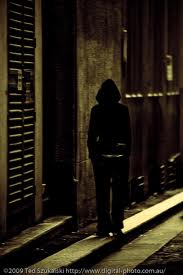 Nooooo Hoody! I suppose that's exactly where the story would end for most people being stalked by a big cat...if it WAS a big cat.

Quite an interesting walk home, with drama, humor, and suspense packed in. I particularly like how his grandma's house kept "disappearing." Hehehe.

Hey frannie the YA author I see ya! Great goin'! Loved it. You got the patter down real good. I think you enjoyed writing this. That's the best thing about challenging yourself..:)

That was pretty good. I liked the language, and the wy you weaved the backstory into his walk. His mix of confidence and unease was very well done.

You did male POV as excellently as female.

Now that's what I call outside your box! OMG Francine that was cool!

Thanks for taking on my challenge, you really really lived up to it! Love it!

ps. don't forget to check back for the finalists' list on the due-date!

Wow, so intense. And I love the little hints about Hoody's background and who he is, they just add another level of intrigue to the entire story. Great read!

Good job, Francine - for awhile, I thought it wasn't you! I missed a few British phrases, wondered what was happening (sorry, still working on my understanding of all-things-international!!).
erica

Nicely done introspection and internal conflict. Hoody felt a little bit out of his element, but too tough to admit it even to himself, to me!

Really well done.... First time at y/a? You wrote it like you've done it hundreds of times.

I truly believe anyone who has a talent for wiring can write in any genre. Your entry proves my point. I can see why Tessa had a hard time choosing her winners.

Can't believe I haven't commented on yours yet. Very well done indeed. Don't know if I'd venture to try YA, don't think my mindset is there. great job.

Certainly not what I'd expect to read from you, Francine but it's good. Well done.