﻿
There's been much talk on blogs about subbing, about writing the perfect "Query" letter, about avoidance of specific "utility" words, about re-crafting sentence structure to eliminate pesky words etc., but no one, no editor or lit agent thinks the same, reads and absorbs content the same, nor will any of the former like the same material set before them (as in passionate for same), so what should an aspiring writer do? Read the following for starters!

This was Simon Trewin (UK lit agent) featured way back in The Independent, June 2004:


Quote: "Clearly, the compulsion to write should come from a genuine desire to say something, rather from a baser desire to get rich fast. Writing for the market is the quickest way to produce a hollow novel which won’t get off the starting blocks".

So what's changed in the world of publishing if anything since that article first saw light of day?


With hindsight the arcticle makes for intriguing reading. Note my *ing endings* - and two-fingers to the *ing* hate brigade!


To read the article go here. But, before you do, have you ever felt like flinging a book on the fire? I have twice, and all because the word rueful appeared more than once per chapter in two romance novels, in fact the despised word popped up no less than fifty times in twenty pages. By page twenty-one I was beside myself with book rage!  Grrrrrrrrr.  Needless to say I didn't burn said books (gave them away) but this image is kind of satisfying because I can imagine all are blighted with the dreaded *rueful grin* and every other connotation of rueful utilised by obsessed romantic novelist: whom I would love to send a Thesaurus for Christmas! 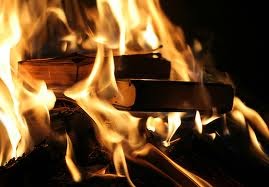 ﻿
Quick add-on: I've had loads of e-mails from published authors and aspiring writers in support of this post, each and every one unwilling to pass comment in a public arena, but all having read category romance novels that annoyed, irritated, cheesed off, infuriated, even p*ssed off two, another stating she actually binned one in disgust, and five having sold unwanted CR novels on Ebay to regain partial compensation for badly written, poorly edited and downright lousy plots! Though I must say I thought the funniest was the case of the shredded book: fed to a garden shredder for compost!