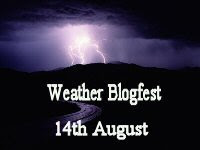 The following is snippet taken from previously published novel (mine), the female protagonist is about to post a Dear John Letter to long-standing lover: any mistakes bear with me - I copy-typed it from book. You will be reading the opening to the book - now out of print!

It was absolutely foul weather but it had to be done. The letter had to be posted before the four o’clock afternoon collection, and the post box was only a couple of hundred yards from the cottage.

Mercedes stepped under the porch and closed the door, the wind so strong she had to literally tug at the handle to secure it on its latch.

Was it just her imagination or had the temperature plunged a degree or two?

She turned up the collar of her raincoat, umbrella out of the equation due to unrelenting gale force wind. She shivered a little, driving rain penetrating the porch, the wind whipping at loose titian-coloured pre-Raphaelite curls already turning to bedraggled dripping coils. She loved Cornwall, loved her cliff-top cottage. But oh, how she hated rain. 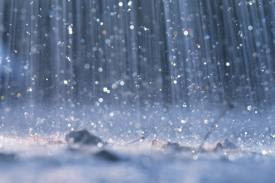 Stepping out from the porch took courage; needles a better description to that which the gods had seen fit to throw down today of all days, the day she’d written the letter. The letter in her pocket that she wanted winging its way to London ASAP.

It wouldn’t have been fair to leave a voicemail message on his cell-phone saying, sorry darling, have decided I’m cutting loose. Goodbye. In any case he would have picked up the call if not in some blasted meeting, and would have promptly laughed and told her to stay put. That he’d come down to the cottage and they’d talk things through. No, she couldn’t let that happen because he’d talk her round, and then nothing would change.

She delved her hands in her pockets, her fingers already turning blue. Only several paces from the cottage, she sensed iced water trickling down the inside of her collar, but needs must when the devil rides. She was feeling more rat-devil than devil woman in telling Guy she couldn’t go on as they were.

She didn’t want marriage for the moment, was that so wrong?

In his mind they were married as good as, his argument being; so why not slot the rings, say I do, and do the marriage bed as man and wife.

He’d suddenly become all protective and possessive, and a downright pain at social gatherings. She annoyed to extent in wary of his arm constantly about her waist or that of her hand firmly clasped in his. It felt like he didn’t trust her in the company of other men, that flirting with other women was perfectly acceptable for him but similar for her utterly taboo.

Oh hell, she was right, the barometer must have dived by now because the rain had turned to iced beads of hail hammering at her head and pinging off her shoulders. She was soaked and freezing cold, but she could just make out the scarlet red glow of the post box nestling in its ivy-clad wall ahead of her.

A few more paces and the deed would be done, the wind having suddenly eased.

Upon reaching the post box she stood staring at it, the letter brushing against her fingers in pocket. All the while iced water tumbled drom her hair and over her face and trickled down neck. It was a now or never situation. Post the letter and be done, or turn around, retreat to the cottage and fling letter and envelope on the fire.

She drew a deep breath steeling her self as she plucked the envelope from her pocket and placed it in the gaping mouth of the red box. At that very instant lightning streaked through the gunmetal clouds as though a message from the gods: don’t do it, you’ll regret it.

Oh hell, she felt in two-minds. In one she was breaking free, in the other she would miss him terribly.


A loud clap of thunder overhead shook the ground beneath her feet and startled she let slip the envelope. It was irretrievable, swallowed whole. It was done now, no going back and burning the letter and carrying on as if everything was all right. The words were written. It was in black and white: I don’t love you any more. Or at least, she’d as good as said that by wanting out of the relationship, yet in reality still in love with him.

She would be cut adrift within a day: once he'd read the letter.

After all, what man would ignore what she'd written and not take it as gospel?

Icy coldness gripped her from within. The hail had ceased, beams of sunlight casting over the sea and cliffs. 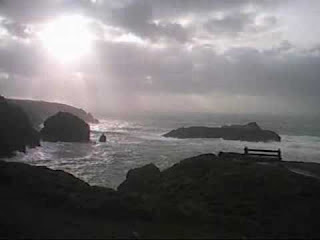 Which of the two weather systems heralded her fate?

She glanced toward Bodmin Moor.

It as always towering majestic, today menacing dark beneath the blue-black thunderous mass rolling on relentless over heath and bog much like waves over massive rocks. 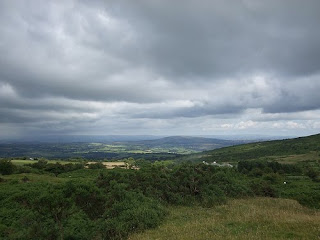 A light breeze picked up, the warmth from the sun stark in contrast to the freezing conditions moments beforehand. She turned about and strolled away from the post box, appreciative of sun on her back. She stripped off her raincoat and slung it over her arm, the sun bearing hot the breeze warm as she tossed her hair over one shoulder and leaned forward. She rung water from her tresses and shook it free feeling akin to wet dog though much sweeter smelling thank goodness.

At least she was hundreds of miles from London. And, thankfuly Guy hated the four-hour plus drive to the cottage so probably enough to deter any thoughts of his tipping the letter on its head by turning up unannounced and declaring he hadn’t received it. Which was more than possible if he was in one of those damned insufferably arrogant moods of his, when nothing and nobody could put him off something he wanted and wanted now.

He hadn’t as yet rung on the house phone or via her cell phone, not since her arrival twenty-four hours earlier, and he must have returned from his business trip to Manchester by now.

It was, to say the least, ominously quiet on the Guy front. 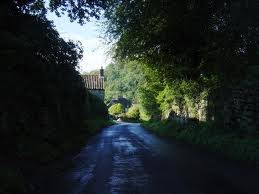 Half way back to the cottage and negotiating a sharp bend she heard the sound of a powerful motor car approaching from her rear. It was travelling far too fast along the single-track narrow country lane. As it careered around the bend she threw herself at the steep grassy bank head plunged into the hedge and received deluge of water from huge puddle. Car brakes squealed and tyres skidded as the vehicle came to an abrupt emergency halt not too far distant from where she stood trembling from the shock of it all.

Why had the gods saved her?

And, who was this idiot in a brand spanking new BMW?
Posted by Francine Howarth at 09:05 17 comments: