I'm not sure I'm quite out of blog hibernation as yet, but when one has good news it's great to share it with friends (blog followers). HELLO!! Hope you're all doing well writing-wise...

My good news the US published novel, long awaited novel has come to fruition one year after subbing it.  This it it, a cross-genre chick-lit/sensual romance novel.


It's on release at Amazon! 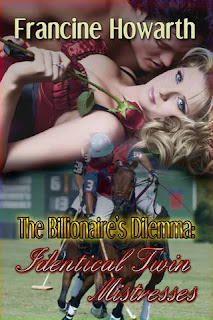 
Blurb:
In the past Tania has masqueraded as Nina at parties, and likewise Nina has pretended to be Tania. As far as Tania is concerned one more act of deception isn’t going to hurt anybody. Despite Nina’s reluctance, she’s won over by Tania’s pleading ways and travels to London on a pre-arranged date with a Polo playing playboy. Against her better judgement she becomes as smitten by Allessandre as that of his prized stallions, and one mad moment of intimacy seals an inescapable bond between them.

Aware his heart is already captured, nevertheless Allessandre has it in mind he’s been duped by identical twins. Although a man borne of honour, he has a ruthless and vengeful nature. Determined to unveil the twins and teach them a lesson they won’t forget, revenge proves bittersweet when the one he truly desires takes flight. Forced to travel half way around the globe in attempt to redeem his unforgivable behaviour he has no idea she walks with lions, nor that a lioness will challenge his desire to be the life-long protector of the one he loves.

My second release is a historical: 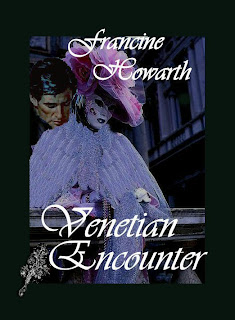 
Amazon .co.uk
~
A Romantic Georgian Murder Mystery: the year is 1800: Naples and Venice.

Amidst a gathering of nobility and gentry a daring jewel theft occurs. A young naval lieutenant suggests the notorious Venetian jewel thief could well be a woman, but a beautiful Russian countess scoffs at his suggestion albeit in coquettish manner. Determined to unmask the identity of the thief, at the same time intrigued by the countess, Lt Herne covertly follows Therese around Naples. But where the countess treads murders occur with frequency and she suddenly takes flight to Venice.

Ordered to the Adriatic on naval business Herne drops anchor in Venice. Tempted ashore by Carnivale a second encounter with the countess proves fatal for both. Madly in love they indulge in pleasurable pursuits but become embroiled in the mysterious death of a Russian count, and Therese feels duty bound to return to St Petersburg. Herne awaits her promised return to no avail. Three years later and back in England he discovers the countess on his doorstep, and wonders if he dare let his heart rule his head again? Equally, Therese fears a secret is best kept secret but Herne asks a potent question and she cannot lie for the truth is staring him in the face!

Posted by Francine Howarth at 09:55 4 comments: