Oh How I Hate my Beautiful Friend - Challenge/Blogfest 45 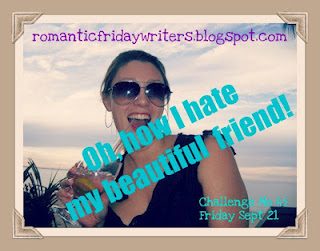 I know, I know, I've cheated with a snippet from my upcoming book due out on release next month. Brief: It's 1650 England. The hero has been beaten up during a highway robbery and confined to bed with suspected broken ribs The story leads onto the famed escape of Charles II from Worcester post English Civil War. The heroine is not his wife, merely his betrothed at present... 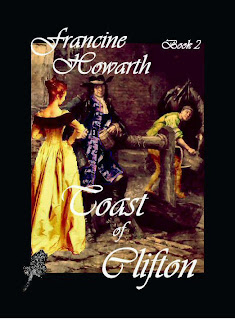 “The two most beautiful women in the district,” said Thomas, a cheery smile, “and which of the two I wonder will tenderly feel my brow and declare me fit for a kiss.”
This was the moment, the moment she had feared, the moment when Thomas’ eyes seemed as though embracing Anna. It was always thus the instant her ladyship entered a room; his eyes following her every movement. She had no right to feel jealous of the close bond between them, yet pain of rancour came upon her without warning, for Anna was younger and breathtakingly beautiful.
To envy Anna could ruin her own relationship with her most treasured friend, for her ladyship gave no reason to suspect her guilty of inner heartfelt desires for Thomas. Nevertheless her ladyship went straight to his side, hand to brow a stern expression. “I do declare you are most unwell, Thomas. A fever no less.” Anna stepped back a pace, as though fearful of taint from a sick man, yet appeared to bestow a secretive smile for him alone? “You are in need of cold cloths applied to your heated body, and I cannot assist you in this.”
He laughed heartily, winced with effort to sit up a little, and said, “Ha, yet Morton in fever and you slaved for days over his body to save his life.”
“That I did, but he knew nothing of my hand in his recovery until you revealed all.”
“And if I told you what he said you’d blush as you have never blushed in your life, my lady.” His eyes fell from Anna’s face, and instead settled on her own and her heart melted. “Her ladyship is a wicked tease, Bess, and  . . .”
“I am aware of that,” she said, her outburst unnecessarily bitter.
“What have I done or not done, Bess? Something ails you. I’ve never known you so quiet.”
“Nothing ails me, bar your sister.”
“Come here, Bess,” he said, tapping the bed beside him. “We have little enough time together as it is, and you choose to stand there when I know you are keen to leap atop me.”
Anna laughed. “I shall leave now, for I am more than reassured you are back to your old self.” With that she smiled, the like bestowed only on close friends. “Make the most of this time, Elizabeth. I shall detain Catherine for as long as I am able.”


To see entries by other participants go here.

I'll be doing the rounds to comment on Sunday afternoon/evening...
Posted by Francine Howarth at 11:55 26 comments:

The RFW Challenge for this Friday is "I Should Have Kissed You".
Should this be your first visit to a Romantic Friday Challenge feel free to join in the fun: just visit RFW, sign up on the linky and post your prose!

And again, yes, wicked, I know, I've selected a passage from my published Historical Murder Mystery and Romance: Venetian Encounter.

Brief: Lieutenant Herne and Countess Roscoff have become acquainted whilst staying at the English Emissary's Residence in Naples, Italy.  Attracted to one another, the countess nevertheless dare not let herself fall for the Lt's charming manner. He too is reticent in the belief she is far more than she seems, after a daring jewel theft occurred within the residency. They are also intrigued by the close relationship between Admiral Lord Nelson, Emma Lady Hamilton and William Lord Hamilton. Anyhoo, attractions and desires are sometimes tempting indeed and not as easily dismissed as one might wish for! ;)

~
Therese glanced one to the other of the trio. Perhaps, thinking the WE significant and a little bold in the circumstance of the present predicament presented to the ménage à trios.
“How soon?” enquired Therese, her china blues finally fixed on Emma Lady Hamilton.
“A day or two for preparation and then, well . . . Take our leave I presume.”
William Lord Hamilton stomped off to his study, Nelson headed for the terrace, and Emma looked utterly torn between both, and instead turned and fled up the grand staircase.
Therese turned her china blues on him, her expression speculative. “And did you know nothing of this?”
Hand pressed to heart, he declared, “I can honest say I had not a hand in this.”
“But you knew, or at least had a suspicion something was afoot.” Hint of a smile streaked her face. “Is that not so?”
“Rumour is one thing, evidence of imminent event another.”
She laughed, a soft laugh. “Come now Lieutenant Herne, you arrive a few days in advance of bad news and then claim no hand in what is to come of this upset.”
Had she overheard Nelson before entry to the salon, for her words mirrored his almost word for word?
“Given that I am to take leave from here tomorrow, I fail to see how blame for letters delivered this very day can be levelled on my head.”
“You are leaving, then? It has been confirmed?”
If he didn’t know better, he could believe Therese was disappointed at news of his imminent departure. “Duty calls.”
“And where does duty call you away to?”
“That I am not at liberty to reveal.”
She pouted her lips, amusement dancing in her eyes. “Oh, I see. Secret Admiralty business.”
“Afraid so.”
To tell her he would be sailing south and then into the Adriatic might set alarm bells ringing, and in any case he might never make it to Venice if orders due on the morrow dictated otherwise. Like Nelson, he had pleasurable pursuits in mind but no inclination to conduct such aboard ship.
She smiled, a temptingly brazen smile, and strolled toward the open doors leading to the terrace. “Then this evening must be a goodbye celebration, for I too will be homeward bound in a few days time.”
“Venice?”
“But of course. Where else?” She leaned forward and glanced in both directions along the terrace. “It seems your sea lord has taken himself off for a walk.”
“That, or . . .”
“Would he?” she exclaimed, curl of lip hinting amusement to the idea of a man sneaking to a lady’s bedchamber in broad daylight.
“Why not?”
She stepped forward and glanced toward steps leading up to the second floor balcony. He in turn stepped closer, equally curious, and in doing so blocked her retreat to the drawing room. She turned suddenly and stumbled into him. From his perspective the collision could not have been better timed to perfection, and she was clearly not immune to the physicality of it all.
A blush to her cheeks was charming in its innocence for she had not expected him to be that close. He leaned forward as though about to kiss her, and her eyes declared such was a pleasing gesture. As much as he wanted to devour her kissable lips, he stepped aside allowing her the opportunity to slip past him, which she did with a swish of skirts and not a glance backward as she left the room. No matter, he now knew she had wanted him to press his lips to hers.

If interested in this novel or others of mine inclusive 1st Chapters -  all can be found here.

To see entries by other participants go here.