Neat this, having a blogfest within the A-Z Challenge!
Good for Wendy Tyler Ryan for celebrating her blog anniversary on April 15th.
For this blogfest we have to write a short piece, take it from existing novel, or from WIP. The "challenge" to include the following words: mist(y), mambo, moon, musk(y), mongrel, myth.
Mine is from a romance novel written 2010, set in the Bahamas.
Brief: in this the MC is with her boss, though not a boss as we tend to think of a boss. Tara has undertaken a PA job that requires compassion, friendship and awareness to Darrell's illness. I dare not reveal more or the plot will out itself. They have become close, but not close enough in Tara's case for a romance to develop in the time he has left, unless . . . As it is, she's still in love with another (the real story) and Darrell's a renowned womaniser with mistress galore notched to his belt. 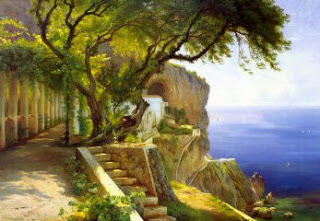 Three drinks downed, a plate of lobster and salad decimated along with fresh fruit and cheese nibbles, the Friday night fire dance routine stole their attention; the dancers light-footing it centre stage to rhythmic mambo.
Darrell said, ‘Hadn’t we better make a move?’ He glanced at his watch. ‘It’s quite a walk back ’ His gaze returned to the masked fire dancer on the dance floor; two scantily clad girls tantalising the young man with their voluptuous bodies. ‘Hell, that’s a sexy number,’ he remarked, whilst pushing back his chair, the bill already accounted for.

‘A bit risqué if you ask me, and you’re right, we should be going.’ She too rose from her seat, turned and strolled away from their table. ‘Shall we take the cliff path or the road?’

‘The cliff path,’ he said, sounding a tad distracted.

As she ascended the steps leading to the main coastal path, she sensed him hanging back. Casting a quick glance over her shoulder, she said, ‘Come on slow coach.’

‘View? It’s almost dark and it’s a view you could paint blindfolded.’

‘Not the view I’m looking at,’ he said, tilting his head to one side. ‘What I’d give to run my hand up just one.’

‘Run your hand up what exactly?’ she asked, looking around to see what had caught his eye and incited wont to touch.

She sensed a flush to her cheeks, for she hadn’t expected that from him. ‘Mongrel. You’ll have to catch me first.’ His laughter echoed, as she paused to slip stiletto-heeled sandals from her feet. In a flash she turned and headed up a slight incline, making sure to keep a good few paces ahead. The long winding path from the beachside bar soon became narrow and evening seriously fallen to night, the tropical canopy so dense a rising moon had little impact in lighting their way. Sense of chill rippled down her spine. Dampness in the air prevailed: a sea mist, perhaps, drifting in with the tide, hence salty brine on the ether.

The high walls of the villa loomed and she hurried onward until sharp stones encountered near the gateway. She paused to re-don her sandals. ‘I wouldn’t have worn stilettos if I’d known you’d intended we walk back to the villa,’ she muttered, more to herself than to Darrell.

Darrell, following in her wake, called after her, ‘What’s the rush?’

She stopped in her tracks, turned and waited for him to catch up. She caught hold of his hand, a moment of compassion. ‘Sorry. It was terribly remiss of me to dash off and set such a testing pace. It’s just that it was . . .’

‘All rather arousing back there in the bar,’ he said, sounding amused. ‘Not surprising really. To be quite honest, what with those girls prancing around half-naked and your cleavage I very nearly had a hard problem, hence my wishing to leave. I feel as randy as hell, and if I kissed you now you’d probably slap my face. So I’ll just let you know that I would if I thought I could get away with it.’

‘Is that what you want, just a kiss?’ She reached up and kissed his cheek. ‘So kiss me.’

Heady scent of tropical flowers she likened to musky incense, and as Darrell’s mouth took possession of hers it was akin to being kissed by a boy on his first date. She couldn’t believe this of a man renowned as a womanizer. It barely lasted a few seconds, and he stepped back like a scalded cat. ‘You taste divine,’ he said squeezing her hand, clearly something else on his mind. ‘What I really want would be asking too much of you.’

Aware of his arousal as he’d drawn her close against him, she said, ‘Tell me then, because I can’t mind read, and . . .’ Sudden conscious of a bell ringing, a bell never heard before she lost momentum. ‘Sorry, but say what you’re thinking, or you’ll never know whether I might have said yes.’

He clasped her hand tighter, and they strolled on and into the lush garden of Tamlin Villa. ‘Tara as much as I want you, in a physical sense, there’s the matter of age difference and the fact that you don’t love me.’

About to say age immaterial, and in no way looking to a relationship with anyone for the time being, to imply otherwise would be downright mean. ‘It’s not that I don’t . . . Oh Hell, that damn bell is so distracting.‘

He squeezed her hand. ‘What bell?’

‘Can’t you hear it? It’s out near the point. Sounds as though it’s coming from Buccaneers Retreat.’

‘You say you hear it, I believe you. Other people have said they’ve heard it and I never believed them. I thought them . . . well, just taking the mick.’

‘How can you not hear it, Darrell?’

‘Myth, fable, legend, whatever? The worst part about it . . . when heard it usually hails bad tidings for the island or someone on it.’

She shivered, the sea mist now ghostlike, creeping through the garden toward them as if by stealth of a predator and intent on cloaking their very existence.

To see entries by other participants go here
﻿
Posted by Francine Howarth at 08:46 30 comments: