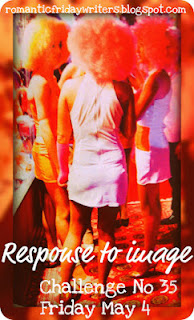 
My contribution to the Romantic Friday Writer's Challenge.
~

“Not bad, not bad at all. Legs up to their . . .” Momentary silence befell them, while Danny eyed the The Lollipops, the girls who were gigging at the pub. “Should have come here before . . . Why haven’t we?”
“Dunno, but the girls said to meet ’em here tonight,” replied Ginger, eyeing a new arrival shimmying toward the bar. “Get a load of that.”
Danny swung round, beer swilling from his glass. “Oh shit.”
Tom burst out laughing. “Am I seeing things?”
“Like what,” groaned Danny, a wet patch in his groin area. “Jeez, that’s all I need.”
Ginger glanced at Danny’s predicament, and roared with laughter. ‘Classic, mate. A sure sign of wet Lollipop dream. They’ll love you.”
“Hey guys,” intoned Tom, eyes glued to the newcomer. “You sure you wanna hang out here?”
“Yeah, why?” Ginger followed Tom’s line of vision. “Ah, see what you mean.”
Danny turned in his seat, his foot catching that of a Lollipop girl: the trio making toward the podium. “Sorry about that, didn’t  . . .”
Bright blues locked onto his, and Danny sensed . . . No, felt the vibes going through his body. Whoa, this couldn’t be happening.”
“Hey sugar,” said blue-eyed Lollipop, deep rasping voice akin to that of an old movie star he’d seen on TV and kind of sexy with it, “come and see me later, after the gig.”
Once again silence befell them as the Lollipops strolled past on skyscraper heels.
“I’m out of here,” said Ginger, getting to his feet.
“Too late,” said Tom, “the girls just walked in.”
Danny glanced toward the door, Jenny having spotted their table and waving as though not having set eyes on him in weeks. Love’s young dream, and Jenny as remote from a Lollipop girl as that of . . .Damn it, why had the girls selected this pub for an anniversary do?
“Oooh, big boy,” she said, slipping onto his knee, a kiss to lips as the Lollipops burst into song. “Missed me?”
“Not yet, I’m still trying on that score.”
She puckered her nose. “Great here, in’t it?” she said, addressing her best mates, his best mates girlfriends. “Different. Like kind of funnnnn different.”
Charlene, Ginger’s girl said, “Yeah, and those Lollipops in’t half got some balls to stand up their in them there skimpies.”
Sharon, Tom’s girl burst into laughter, said, “Big girls, in’t they. Like tall, tall.”
Charlene started giggling. “Oh Danny, if you could see your face.”
He laughed. “Come here.” The kiss potent, driven by lust, edged with guilt. “I love you.”
“I know you do,” said Jenny, semi-breathless, “but what brought that on?”
“Nothing, just saying.”
Ginger laughed. “Happy Anniversary mate.” He raised his glass. “To all of us, one year down and two days to go to your big day.”
“Thanks, Ging,” said Jenny. “Stag and Hen do in one is more fun, don’t you think? And guess what . . . Danny boy, you’re going to get to sing with the Lollipops.”
“No way,” said Danny, hefting Jenny from his lap. “No bleeding way I am getting up there and singing along with trannies.”
“Danny. Wait.”
Ginger laughed, got to his feet and raised his glass. “Bad move, Jenny, bad move.”

Hee hee, over word count if it's 400 for today's challenge. And believe it I penned this over lunch. OK: to see other participants in this picture prompt go here.
Posted by Francine Howarth at 13:39 14 comments: