There's a follow-up at end of this snippet in reference to publisher rejection for this specific novel. It may help you to avoid the same pitfall I dropped into without realising I had.


The lovely Michelle Gregory hosted this blogfest so please check out her url below to read other author offerings to the "Share Your Darlings" blogfest.


http://michellegregory.blogspot.com/
Brief:
Ricky Lindon, engaged to Tara Portland, never for one moment thought Tara would be passing a particular New York restaurant and would see him (apparently) kissing another woman. She did, though, and ran and kept running, then eighteen-months later he sees her and cannot get to her: you'll see why! This snip taken from opening chapter to category romance novel: just completed

Tethered to the mainmast of a sailing ship and fifty lashes of the whip supposedly raining down on his back, Ricky Lindon sensed something or someone on the quayside. It was just a flash in his peripheral vision.

He inclined his head to see what had caught his eye.

An exquisite apparition had come to brighten his day. Well, not as such, but certainly a vision of beauty.

What with a damn cloud as black as night overhead and looking like it intended business, the director suddenly yelled, ‘Cut,’ threw down his copy of the day’s script in gesture of utter frustration, and furthered with snide comment: ‘The effing script Lindon, read it, you might get an idea of what I want from you today.’

‘And if I’d sneezed?’ quizzed Rick, thinking the ruddy director a pompous twit at times.

The director turned and stormed off, shouted, ‘Take a break everyone, and when Don Juan is ready to continue, perhaps he’ll be good enough to let me know.’

Ricky glanced over his shoulder to fellow actors. ‘What in hell is his problem?’

His co-star shrugged his shoulders, the flogging master did the sign of the cross with his fingers, and the camera crew busy scrambling to cover their kit with rain covers sniggering like idiots.

The creamy vision all the while remained on the quayside taking in the scene of irate director and entourage scurrying along behind him.

So what if Ricky Lindon was meant to look as though suffering the pain and humiliation of fifty lashes. Hell, he’d only turned his head slightly. And sure, his concentration of looking pained had lapsed into a broad grin. So what.

Damn it all, he couldn’t believe a woman like that was there alone without a man of some sort hanging out with her. She was gorgeous despite face half shadowed by wide-brimmed hat, her reflective shades purposefully fixated on his half naked body implying overt interest in what he had to offer.

If it hadn’t been for her stance of come and get me if you dare, he wouldn’t have grinned and caused the director to throw a tantrum. Seeing as he was already in the proverbial what the hell, he swung his head back round to get a better look at long slender legs and slim shapely hips.

Well if this wasn’t his lucky day.

A sudden offshore breeze whipped at her dress dragging it up her thigh, and the casual way in which she caught the brim of her hat to prevent it blowing away caused his heart to blip: several times.

He panned his eyes back to her face, the sensual sexuality of a smile bestowed upon him utterly breathtaking, not to say stimulating in a maddeningly frustrating way.

Overhead the gunmetal grey cloud stretching far distant suddenly shimmied past the sun like the gods were smiling down on him. And, lit from behind her figure turned to silhouette. A stunning figure it was too.

Something about her was damn familiar, but it couldn’t . . . couldn’t be Tara.

There it was again,  that come get me smile. It had to be her. No two women were that alike except identical twins, and Tara didn’t have a sister let alone a twin.

The fabulous vision suddenly turned about and strolled away. 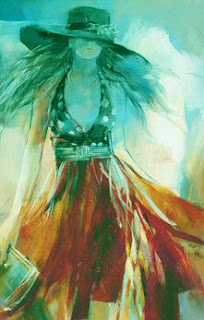 He watched the gentle sway of her hips, relished the spectacle of long legs and trim ankles. She was barefoot and brazen, yet her poise sensual serene, and the way she pulled her hat from her head and shook long blonde locks loose set his pulse racing.

Was it Tara? Dare he shout out her name?

He’d look a right tosser if wrong in his thinking.

He had to know, one way or the other.

He turned to one of the sound technicians, asked, ‘Hey Ron, do you know who that young lady is?’

Ron glanced over the rim of his specs in her direction, replied, ‘Yeah, she’s with the guy who bankrolled the movie. Don’t know her name, though.’

Damn it, he was choked. His heart dived. He was still lashed to the mast and not one of the bastards standing around taking a blind bit of notice of that fact, otherwise he could have legged it after her.

He noticed a man with a clipboard step toward her in a rather officious manner. Her instant gesture of throwing her arms in the air suggested she didn’t have a pass and had no right on set. And she looked like she didn’t give a monkey as though she owned the place, and that was just how Tara would have responded to a jumped up jerk.

Great, how in hell was he supposed to get near her if she was shacked up with Darrell Easterly the shipping billionaire?

The man had bodyguards galore, probably ex special-forces soldiers with sniper credentials to die for: literally.

Ricky Lindon, heartthrob movie star once upon a time engaged to Tara Portland, had suddenly found himself thrown out of her apartment block merely because he’d been spied kissing some girl in a restaurant. It was a kiss that had meant nothing to him, and bestowed in mere gratitude by his agent’s assistant. Trying to explain that to Tara had gotten him a slap to face, door slammed in his kisser and added indignity of an armed security guard hauling him into a lift before bundling him out and onto the street. Tara had then vanished within days, and now she’d popped up with billionaire shipping magnate in tow.

There was unfinished business between Ricky Lindon and Tara Portland, and the apparition on the quayside had given him the big come get me if you dare.

No way could Ricky Lindon walk away from that kind of a challenge.

I don't mind posting rejections to subs and why they occurred - such can help others to avoid the same mistakes!!

This followed standard rejection line of not for us: quote:

"However, I don't feel this manuscript hits the right note for *******. The narrative needs to be sophisticated and serious, and that requirement more or less precludes romantic comedy, which this ms has leanings towards. The writing is florid (i.e. ' class oozed out of her like top whack champagne sizzling and brimming a cut-glass flute') and this kind of knockabout prose, while great fun and perfect for a particular type of rom com, is not what we're looking for at *******.

In general, we are looking for a greater attempt at realism in the narrative and in dialogue, as well as characters with which typical romance readers can identify, something I don't feel you've achieved here. It's also hard to create a sensual or sexual atmosphere between characters whose interior monologues are as jokey as yours, and we are looking specifically for sexy mss"

---
Fair enough, I expect the ed was just being nice about something she thought of as utter crap!
OK, so you've read the snippet, now read the sentence in context as referred to by the editor (top wack champagne):


When he’d first met Tara she hadn’t fallen at his feet like other young women, and he’d loved the way class oozed out of her like top wack champagne sizzling and brimming a cut-glass flute. And, element of mystery about her, too.

Smitten and intrigued he’d tried digging into her past, and she’d evaded his every question by changing the subject. He couldn’t imagine she’d had anything to hide, but there was something and it was a big deal by the way she’d gone off at him for pressing on the subject of parents. Afterwards he’d avoided prying into her life beyond that of every day acquaintance.

So, where does romance end and suddenly become chick-lit or rom com?

These two bloggers have some great chat going on too: