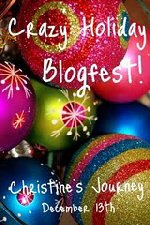 This blogfest is kindly hosted by Christine Danek﻿
﻿
Brief:  this birthday scene is snatched from my novel "Unbidden Billionaire Legacy" air of sadness prevailing. Tara’s boss is having a bad moment  – suffering terminal illness and knowing his time is almost up he hoped Tara might have extended a little TLC of a sexual nature in his direction. She in turn understands his sense of insecurity and impending doom, but has not succumbed to his desires despite extreme fondness toward him.
﻿
Caribbean Christmas

Darrell Easterly's yacht lies at anchor just off the beach beneath Tamlin Villa.


For the most part Tara felt sure Darrell had enjoyed having his most treasured staff and dearest friends around him, but seeking him out after his mysterious disappearance she's surprised to see him standing on the lower deck leaning on the deck rail: not looking shoreward but gazing out to sea.

She makes her way down to him, sensing something wrong.

Rather than draw attention to him by calling out, she makes to stand quietly alongside. And, for the first time ever sees tears welling in his eyes.

She places a hand on his shoulder. ‘It’s OK, you’re allowed to have a bad moment.’

He grips her hand, a kiss to it and no words are needed to express the awfulness of his plight. It's reflected in his eyes. Surrounded by people who love him, he nonetheless felt isolated, his fear of losing them and life itself unbearable.

‘That’s what I’m here for, remember?’

He smiles, turns to face her. ‘You’ve been the best thing in my life in a long while.’

‘Flattery will get you everywhere.’

He chuckles. ‘Not where I’d like to be, though.’

She turns about and leans her lower back against the deck rail. ‘Hell Darrell, look at all the lady guests on the upper deck. Haven't you noticed them, like exotic perfumed flowers draped languidly on the deck rail in hope you might glance their way.’

She ignores his deliberate input, and furthers with, ‘You mean to tell me their scanty outfits and all eyes in your direction  as they sip Krug, fails to make you want to go party with them, really party?’ 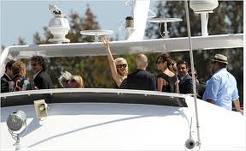 ﻿
Darrell glances up, and scans the array of beauties. ‘Most are married, a few too soiled by strings of lovers and . . .’

He pauses mid sentence, and Tara suspects someone has caught his eye.

‘The blonde, who did she come aboard with?’

‘Uhmm, that banker friend of yours, if I remember correctly.’

‘Did she now,’ he says, easing away from the deck rail. ‘I don’t remember being introduced.’

‘Perhaps your friend thought it a wise move to keep her out of your sights.’

‘Bastard,’ he says, making straight for the steps leading to the upper deck.

Sense of relief sweeps over her, for if his interest dwells elsewhere her life will be so much less complicated in the days to come.