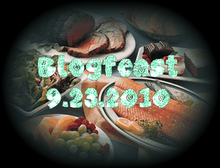 This is my entry for the blogfeast blogfest hosted by Angela - to see the full list of entries go here and look for the list at bottom of Angela's post.
Crossroads! 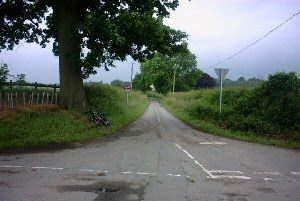 ﻿
This snippet has been snatched from one of my novels.

Sue couldn’t believe she’d just done that; driven up to the crossroads and instead of driving straight over she’d turned right. Now, here she was at Home Farm, the place of her happy childhood.


She dashed inside the old farmhouse, called out a hello and received a reply from her mother, as always in the kitchen. Sweet essence of apple drifted on the ether, and before she entered that oh so familiar room she more or less expected to see flour dusted hands, her mother in the process of rolling pastry.

Her mother glanced up, smiled, and with back of wrist brushed a wayward strand of hair from her brow, indeed exactly as visualised beforehand.

Sue sensed inner scrutiny, her mother’s expression implying she might know more than she was letting on. She was right, for her mother averted her gaze and flipped the edge of the pastry over the rolling pin and began lifting it from the table.

‘Is there something you’re wanting to tell me?’ she said, quiet matter of fact yet hint of secondary smile, ‘only you look as though bursting with good news, and itching to tell someone. Is it your dad, you want?’

‘What makes you think I came here to reveal something?’ quizzed Sue, as diced apple covered with brown sugar disappeared beneath a cloak of pastry.

Sue was stunned, thinking she’d kept her secret so well. ‘How long have you known?

Her mother suddenly stopped finger pressing the pastry edge, her imprints already halfway around the pie dish. ‘So you were . . . Oh my goodness . . .’

‘Yes, shockingly pregnant at the altar.’

‘Not the first time that’s happened in the family, and I doubt it’ll be the last,’ proclaimed her mother.

Her mother’s attention suddenly re-directed to the pastry and flush to her cheeks, Sue sensed this a confessional. ‘You mean, I . . .?’

‘Yes, and your grandmother before that.’

‘Well, and I thought I might be letting the side down, hence my keeping it a secret.’

Her mother picked up a knife and began trimming excess edging from the pastry case. ‘And Andy, did he know? Is he pleased?’

‘He’s ecstatic,’ she replied, as her mother hefted the pie dish to the AGA.
Then, with floured hands and all, her mother came round the table. ‘I’ve been knitting baby clothes, and your dad said I might be jumping the gun,’ confessed her mother, a tear tracking down her cheek. ‘But I knew, just knew.’’

‘What will dad say, do you think?’

‘I can’t begin to tell you how pleased he’ll be. He’s already got a little pair of Wellington boots tucked away. Teeny-weeny ones. So cute.’

Sue burst into tears, and her mother as always hugged her close. 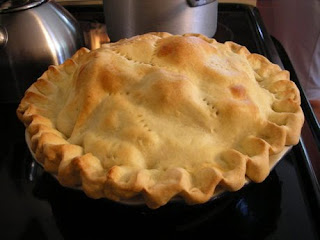 "Shh It's a Secret" - Summer's Blogfest 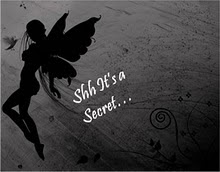 ﻿
This is my contribution to  ﻿Summer's  It's a Secret.
To see entries by others go here
Mine is part of an opening sequence from a romantic suspense novel, one involving obsessional desire!
This follows on from interaction between Danny (head groom) and Sue (wife of Andy) - secrets & lies possibly just exposed by her brother-in-law - her and Danny now running through woodland.


Oh God, what had she done?


If it hadn’t been for Andy’s angry manner of throwing his cell-phone to the seat of his car, Danny wouldn’t have paid much attention to his boss’ departure from the stable yard; shotgun tucked under arm.

As it happened, Danny had broached his availability and no impending duties of any relevance if a shoot was in the offing, only to be met with strictly no company needed response: “ Stay put, I need no help for what I have to do”.

There was so much that she needed to say, to explain, and if nothing else, Andy was due the truth behind any notion of duplicity between herself and Mark. That is, if his brother was guilty of having revealed her worst fears. If not, why had Andy left in such a hurry, in such a black mood, and why hadn’t he said where he was going?

If anything happened to Andy . . .

She couldn’t go there, dare not think that far.

The suddenness of a 12-bore fired at some 400 metres distant echoed across the wooded valley.

Shocked to abrupt standstill, she glanced back at Danny. He too stopped in his tracks as a squawking cock pheasant dashed across their path and took to the wing. Rooks meantime rose above the green canopy in winged tumult.

A deathly hush soon befell the woodland: creatures as though holding breath, afraid to break cover.

‘I have to, have to go on,’ she said, resisting his hold upon her. ‘There’s always hope, there has to be.’

‘If you say so,’ she said, shoulders sagging. Meantime her brain raced, her heart pounding in readiness to take flight.

‘I’ll be five minutes, no more,’ he said, his expression one of compassion.

The instant he relinquished his hold she sidestepped and legged it.

Brambles tore at flesh, skin zinging from nettle stings as she sped onward. All the while she was aware of what lay ahead: for once seen she would never be able to eradicate from memory. She knew that, and could hear Danny following in her wake, the ominous quiet of the woodland strafed only by the snapping of twigs beneath their feet.

Andy always so strong, the backbone of the family, the head of Hanham Racing, and her champion in all things, how had she let it come to this?

He’d known his brother had twice attempted murder most foul in a way that would have been categorized an unfortunate accident at high-speed, yet Andy had brushed off each attempt as though nothing to worry about. Then, then, one stupid mistake for her part and now the love of her life brought to his knees.

What else could have driven him out here, other than Mark’s vindictiveness and desire to acquire Andy’s all: Blakely Court; Hanham Racing; and her. Why her, when he could have any one of the many beauties who vied for his attentions?

Mark was so damned arrogant and impossible to reason with, and in his sick mind still believing he could win her over with a little persuasion.

She had such wonderful news for Andy too . . .

Why, why had she kept it a secret?

400 metres suddenly seemed more like 400 miles and she felt as though treading ground as opposed to moving forward.

Her every breath slid into slow motion, her former happy life with Andy unreeling before her very eyes at warp speed.


I so wanted to put a picture with this to give sense of atmosphere, Andy's line of business that of Formula 1 racing, but I stuck to Summer's strict instruction of no images! :(
﻿
Posted by Francine Howarth at 09:40 12 comments: