Posting this a day early: got a lot on tomorrow (Sat).

The Hating Game by Talli Roland.
Book Blurb: When man-eater Mattie Johns agrees to star on a dating game show to save her ailing recruitment business, she's confident she'll sail through to the end without letting down the perma-guard she's perfected from years of her love 'em and leave 'em dating strategy. After all, what can go wrong with dating a few losers and hanging out long enough to pick up a juicy two-hundred thousand pound prize?
Plenty, Mattie discovers, when it's revealed that the contestants are four of her very unhappy exes. Can Mattie confront her past to get the prize money she so desperately needs, or will her exes finally wreak their long-awaited revenge? And what about the ambitious TV producer whose career depends on stopping her from making it to the end? Who will win The Hating Game? 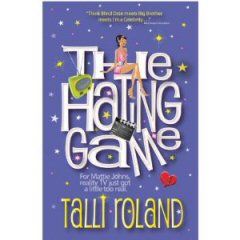 I’m no fan of reality TV shows: I hate them. But, from what I’d seen of Talli and how she expresses herself on her blog, I had a sneaking suspicion “The Hating Game” would turn out pretty much as expected. It didn’t disappoint, it’s a hilarious sock-it-to ‘em chick-lit novel, which takes the p*ss out of reality shows. Not least, that of backstage politics: bitching and rivalry between production staff.

Being chick-lit, needless to say the protagonist, Mattie Johns, is self-obsessed, fashion conscious, hopeless at any thing domestic and, embittered in post-relationship blues. With a failing business, her ex love interest also ex partner in her company and his new business now thriving, no one is spared her critical scorn, whether in thought mode or verbal outburst. She’s thoroughly obnoxious, and as a reader one begins to think her ex, Kyle, did the best thing in quitting the Mattie Johns zone. Yet, one can sympathise in her despair and in her belief she's been betrayed in love and in business.

Enter Nate Reilly, a wannabe producer of new reality TV show plus £250,000 bait trailing from metaphorical hook. In dire financial straits Mattie sees the benefit in taking the bait. Given bad press relating to reality TV shows, and even if the worst comes to the worst what’s a little humiliation on the back of a 250 grand cheque? In preparation for each night’s show her expectation of humiliation is far from reality, and although wanting to quit the worst reality TV show to hit TV screens the prize money keeps her dangling on the most horrid thread of her life. Yes, ex boyfriends are key for The Hating Game-show.

Without spoiling the plot, I can tell you Mattie’s comeuppance for utter bitchiness, for having a nasty little chip on her shoulder, and for assuming the worst of Kyle, places her in a position of extreme vulnerability. An ex with psychological malfunction and obsession to possess her scares the hell out of Mattie on the final Hating Game Date. The knight in shining armour who saves her is the last person Mattie would have expected to come to her aid. As true reality shocks her to the core, it's finally lesson learnt in how not to p*ss off a thoroughly decent bloke . Buy it and enjoy!! Go to Amazon.
Posted by Francine Howarth at 20:59 13 comments: