I've heard it said many writers (authors) are inspired to write because of music and images, even a snipit of coversation oveheard in a restaurant, train/plane etc., can turn out to be the first or last spoken line within a novel.

Well, I have to say a while back I saw a painting of two men engaged in mortal combat. Now why, I don't know, but to me they looked like father and son and very definitely on opposing sides of a war situation.

And, if you're not familiar with the way I come by stories, I'll give you a quick update. I go to bed not knowing when characters will materialise in a dream, their story complete by morning via cinematic experience. Needless to say, "father and son" came alive, so too the female protagonist and why the men were fighting!

It is a historical plot, and I can't wait to get on with it.

When if ever it's accepted by a publisher, I'll post the image here and then I think you'll understand why it stuck in the subconscious and why the characters became real!

Anyhow, thinking images, isn't this romantic, and I'd love to know if it invokes an inkling of inspiration within you, as in, who the couple might be and if it's as romantic as it looks given the sombre ambience. 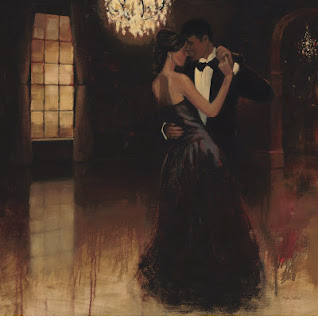 Posted by Francine Howarth at 16:06 4 comments: