Today I have the lovely Louise Turner sitting in the Interview chair
talking about her novel
"Fire and Sword". 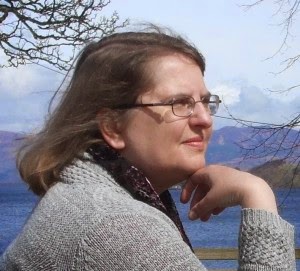 Born in Glasgow, Louise Turner spent her early years in the west of Scotland where she attended the University of Glasgow. After graduating with an MA in Archaeology, she went on to complete a PhD on the Bronze Age metalwork hoards of Essex and Kent.  She has since enjoyed a varied career in archaeology and cultural resource management.  Writing has always been a major aspect of her life and in 1988, she won the Glasgow Herald/Albacon New Writing in SF competition with her short story Busman’s Holiday. Louise lives with her husband in west Renfrewshire.

It was inspired by the landscape and history of the area where I live in West Renfrewshire, Scotland, and in particular by the Collegiate Church of Castle Semple, which is an old ruined church built in the early 1500s.  I was intrigued by the story of its founder, John, 1st Lord Sempill: what piqued my interest most of all was a reference to him in one of our local historical accounts.  His life was summarised by one little sentence which went along the lines of ‘Sir Thomas Sempill died defended the King at the Battle of Sauchieburn in 1488 and his son John was made a Lord of Parliament a year later.’ Now, considering that the rightful King of Scots was murdered at Sauchieburn, and that John was elevated very rapidly to ranks of the nobility by his successor, it was clear that John Sempill enjoyed a massive transformation in fortunes in a very short period.  I wanted to explore how such a change in circumstances could have happened, and the result of my research formed the framework of ‘Fire & Sword.’

This is a difficult question, because I don’t think your average late medieval male can really be completely placed within either category!  In terms of his social status, John Sempill is most definitely an alpha hero – though not ennobled, he’s a baron and a sheriff, and as such is required to be a leader of both his household and his fellow men. At the same time, he wants very much to pursue the virtues which would be more in keeping with what we’d call a ‘beta’ hero – he believes in chivalry, and would like the world to seen him as noble and virtuous and good.  In his terms, this means he’s generous to his family, sympathetic to his tenants, and suitably pious in his religious and charitable life so his authority always comes across as firm but fair. John inherits his titles at the start of the book and we watch him grow as he shoulders this burden in difficult circumstances. Since his father died a traitor, his situation is precarious, with rival families plotting against him to make gains at his expense, until he ends up fearing not only for his own future but for that of his entire family line. In such circumstances, he sometimes finds himself pushed into doing things he wouldn’t necessarily condone and it’s how he rises above and beyond this that forms the main focus of the novel.

3) Can you describe your heroine’s personality- title/rank?– description!

Margaret Colville is certainly more of a stroppy heroine than a sloppy heroine!  The only daughter of an Ayrshire baron, Margaret finds herself married to John Sempill for political reasons. When she was first betrothed to him, he had good prospects, and her family thought she’d do well from the marriage.  But when the time comes, his situation is at its nadir, and the last thing Margaret wants is to get married to a traitor.  In her mid-teens, Margaret is forced into a place where she really doesn’t want to go. All she can do in response is make life as difficult as possible for her new husband until he can become the high-achiever she was bound to marry in the first place.  She accomplishes this with aplomb – so a major element of the story is how two people who have been yoked together in extremely difficult circumstances can find some common ground and grow to love each other.


(3) Are there secondary lead characters with important roles?


Hugh, 2nd Lord Montgomerie definitely has claim to that role!  He’s the anti-hero of the piece, a mercurial and ruthless nobleman who kills John’s father on the battlefield and rapidly rises to power in the new regime. John finds himself reliant on Montgomerie’s favour as he battles to survive and prosper, and it’s something he finds increasingly difficult to justify as Montgomerie’s underhand methods are inevitably at odds with his own.


It’s set in late fifteenth century Scotland, at the beginning of King James IV’s reign (1488-1513). James IV is well known as Scotland’s flamboyant, cultured and outward-looking Renaissance king, but his early years on the throne were less than promising. Fire & Sword explores this period, which was plagued by feuds and political intrigue.


(5) What is it about your chosen era/periods that you most enjoy?

I think what fascinates me most is the fact that it’s a time of transition.  It’s a period when medieval self-loathing is giving way to the more enlightened attitudes of the Renaissance, when Classical thinking is becoming more widespread and there’s great hope for the future.  It’s also a period of massive transformation in the ruling classes – the ‘old’ order of the knights is losing ground and the nobility are finding that they have to compete in a more egalitarian world where career politicians (often lawyers) can become just as influential at the highest level.  This is especially true in Scotland, where society appears to have been less rigidly defined than in contemporary England, with marriages often taking place between the landed families and the monied nouveau riche who lived in the towns.  John Sempill’s mother, for example, is the sister of a minor Ayrshire knight who has advanced very far as a career lawyer, to the point where he is the Lord Advocate of Scotland and charged with arraying King James III’s army before the ill-fated Battle of Sauchieburn.

(6) Which if any of your characters do you dislike, and why?

To be honest, I have to say that I don’t really dislike any of my characters.  Obviously, it’s easy to detest Matthew Stewart, who’s the real villain of the piece, but everything he does is logical and justifiable when you see things from his point of view. I actually get into his head in the follow-up to Fire & Sword, and - believe me - he’s really not that bad once you get to know him.  I don’t believe that in most cases individuals represent absolute good or absolute evil – there’s usually some gradation in between.  In short, everyone in Fire & Sword is out to protect their own interests.
Some, like John, do this politically and by largely peaceful means, others do it by using the fire and the sword of the title.  And John Sempill can be as bad as the rest of them when the mood takes him, behaving in a manner that’s very harsh and vindictive.  In his case, however, he at least has the decency to feel bad about it afterwards.

(7) Do you avoid sex scenes, gross violence or other in your works?

Not really.  I write what I need to write, and that’s that.  Whether it survives the editing process is another matter – quite often, scenes of sex and violence mostly end up abandoned on the cutting room floor because they slow down the pace of the story! I let the reader add whatever details they want to using their own imaginations.


(8) How would you rate your novel – historical fiction, romantic fiction, tear-jerker, emotional drama, swashbuckling
adventure, or...?

It fits nicely in the ‘historical fiction’ bracket, though that’s a very broad term for a genre that’s very multi-facetted in its nature.  I suppose I’d describe Fire & Sword as a coming-of-age tale set against a background of political intrigue, with a dash of romance thrown in for good measure. 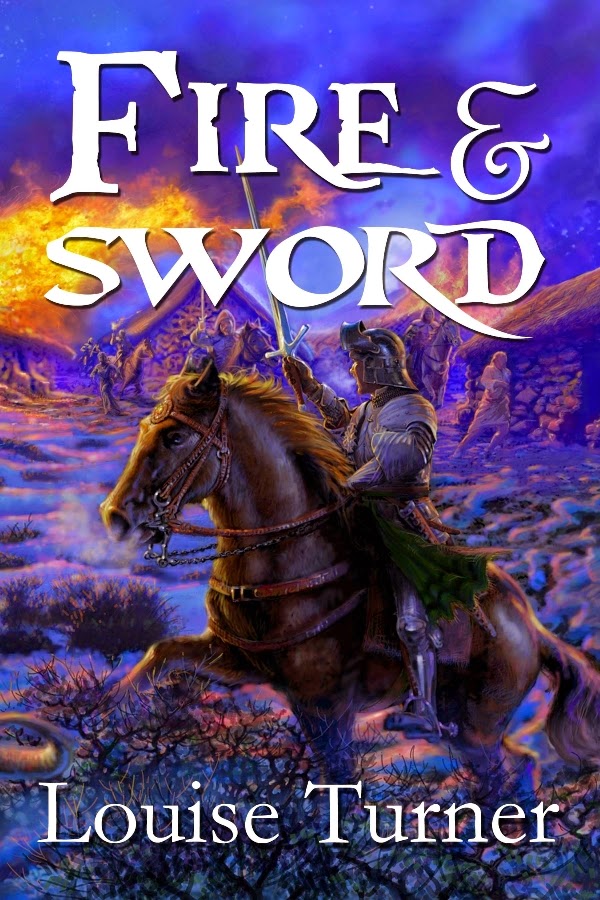 On the 11th June in 1488, two armies meet in battle at Sauchieburn, near Stirling. One fights for King James the Third of Scotland, the other is loyal to his eldest son, Prince James, Duke of Rothesay.
Soon, James the Third is dead, murdered as he flees the field. His army is routed. Among the dead is Sir Thomas Sempill of Ellestoun, Sheriff of Renfrew, whose son and heir, John, escapes with his life.
Once John’s career as knight and courtier seemed assured. But with the death of his king, his situation is fragile. He’s the only surviving son of the Sempill line and he’s unmarried. If he hopes to survive, John must try and win favour with the new king. And, deal with the ruthless and powerful Lord Montgomerie...

Thank you.
Posted by Francine Howarth at 08:22 No comments: