When researching for historical novels one comes across some amusing coincidences, such as found on the Internet.

Whilst looking up a specific period, inclusive fashion and cloth used for certain items of female clothing, I kept encountering a "guy" voicing great knowledge of such things, and at the end of each section to do with women's clothing I encountered this:

"Women did not wear knickers during this period"

The author was referring to the period Elizabeth I through to Victorian times.

Well, OK, he can believe that if he likes, and maybe the very poor didn't! In the end I turned to authentic research via period diarists and letters/invoices kept by grand houses, and did by chance come across a shopping invoice from Elizabeth I era (A royal castle) in which knickers were referred to as breeches! Now that made me look again.

Clearly wealthy girls wore knickers (breeches) and petticoats (underskirts), some of the breeches gathered (drawn in at lower calf/ankle) and always tied at waist with pull-through drawstring.

There was another similar order/receipt/invoice at the time of the English Civil Wars. It was for two lady silk breeches.

Elizabeth I's funeral effigy of 1603 she is depicted wearing a corset and drawers. Some historians (most often men) claim the narrow drawers were added later in the 1700s (Accounts of the Great Wardrobe - 1558-1603). Also note John Colte was paid £10 for the provision of an image (her majestei) wearing "one pair of straite bodies, a paire of drawers". She did indeed have "six pairs of double linen hose of fine Hollande cloth" made specifically for her in 1587. As we know "hose" refers to stockings/leggings.  At this time the Queen of France wore drawers/breeches.

But, here's further interesting research: Baroque Fashions post Tudor/Elizabethan times into 1700s and the Stuarts. Samuel Pepys diary reflects his suspicions that his wife was conducting an illicit affair with another man. He wrote on the 15th May 1663 - "But I am ashamed to think what a course I did take by lying to see whether my wife did wear drawers today as she used to, and other things to raise my suspicion of her; but I found no cause of doing it". - 4th June 1663 - "I did so watch to see my wife put on drawers, which poor soul she did". 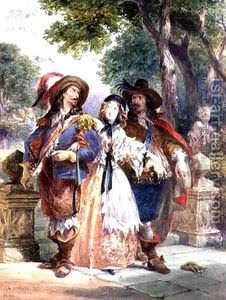 Bear in mind these are modern versions with elasticated waistbands.

The "Cavalier" style of dress became popular during the early part of the Baroque period. This style marked a distinct change from the fashions of the prior Elizabethan age. Starched, stiff fabrics were replaced with natural satins and silks for breeches and hose. Trimmings were simple and confined to buttons, buttonholes, and lace. Womens' bodice necklines were cut wide and square, and waistlines heightened. By 1630, sleeves became full and draped softly below the elbow, necklines softer still often rounded and sleeves revealing the wearer's lower arm for the first time in centuries. 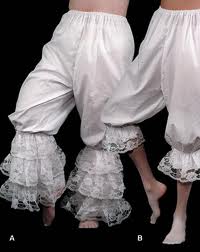 Elizabethan ladies underwear had consisted of a linen chemise or smock and (optionally) linen drawers, although referred to as breeches they were designed more akin to pantaloons after Pantaleone a clown/jester who wore bright coloured pantaloons reminiscent of Asian/Afghan fe/male trousers/pantaloons (breeches). 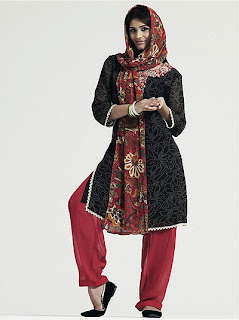 The Elizabethan chemise could have a low, square/round neckline or a high neckline; either style worn with ruffs (to c. 1625) or the newly fashionable broad collars.

Whereas, during the Baroque period the linen chemise/smock and optional drawers (breeches) still existed but by 1640 silk had begun to take precedence along with lace trim, this design following right through to the Georgian period when cotton became the favoured choice for undergarments.


Cavalier fashion for men paralleled the trends in women's clothing!  Note the above image (two men and woman/trio) mens' outer breeches/pantaloons as good as matching them that lies below lady's gown!

Mens Cavalier "doublets" effectively became longer and longer over time, replacing short Bolero-style Elizabethan jackets made of stiff fabric or pointed in front, and "jerkins" (utility jackets) made of leather. The stiff hose of the past was soon replaced with full, long breeches, as well as softer, wrinkled hose below breeches. 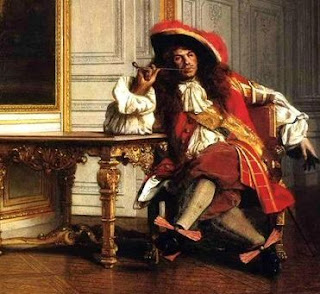 Later in the period, men wore baggy breeches (as above) known as "Rhinegraves,", some gathered below the knees with lace frills for dressy occasions. This trend in breeches led to the popularity of "Petticoat breeches" for women, which were full in skirt and worn low on the hips. 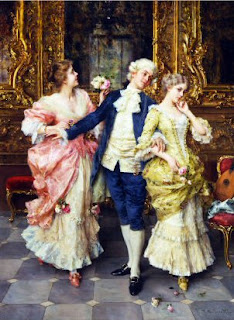 So, although this image represents cotton underwear worn by wealthy ladies at the time of the American Civil War, the same garments in silk were worn by rich ladies during the English Civil War: note these breeches (pantaloons) replicate those of the silk breeches in the upper image.

By the era of Jane Austen pantaloons were for more relaxed occasional wear (especially good for country pursuits), whereby the tighter "officer style" breeches became fashionable for gentlemen and decidedly tight-fitting: not always for the better in cases of a rotund gentleman! 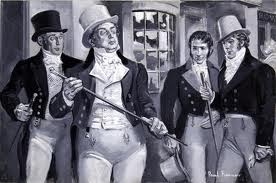 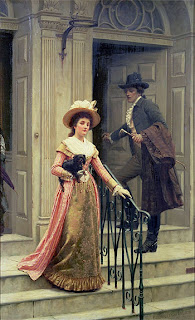 By Victorian times "breeches" were renamed "pantaloons", fine lawn still the preferred fabric for undergarments. By the end of the Victorian era pantaloons became bloomers, and by the Edwardian era silk was again in vogue for the better off ladies within society! 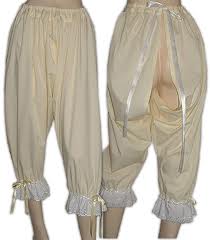 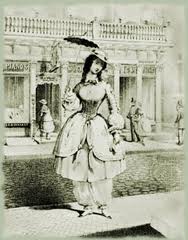 By the 1930s French Knickers and Camisoles were all the rage for the more fashion conscious women! 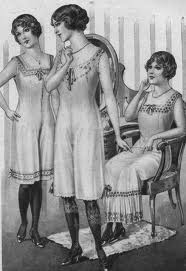 And knickers just got briefer and briefer 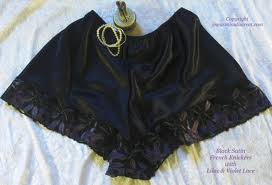 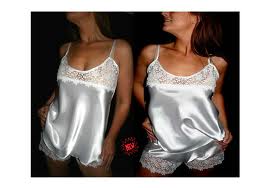 Until the G'String, which needs no image!!

Of course, in late the 1950s early 1960s culottes became all the rage for ladies outerwear! 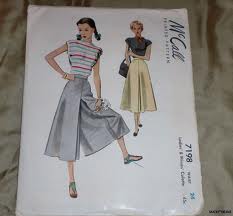 Have any of you encountered misinformation by so-called "knowledgeable male" informants on historical fact, not to mention much other misinformation bandied around by women?