Today in the hot seat is Juli D. Revezzo, revealing aspects about her self and her novel "Watchmaker's Heart".

So a big thank you goes to Juli, for taking time out from her busy schedule to  enlighten and delight us with news of her career as an author and what inspires her writing!
~ 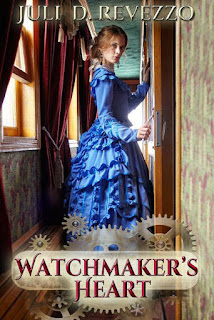 Juli D. Revezzo writes fantasy and romantic stories filled in with elements garnered from a lifetime love affair with magic, myth, witches, wizards, and fated lovers and legend. She is the author of The Antique Magic series and the Paranormal Romance Celtic Stewards Chronicles series, steampunk historical romance WATCHMAKER'S HEART, and short stories published in ETERNAL HAUNTED SUMMER, LUNA STATION QUARTERLY, among others. She is also a member of the Independent Author Network and the Magic Appreciation Tour. To learn more about this and future releases, visit her at: julidrevezzo.com

Ans: I think it was inspired by art, actually. I’d always enjoyed Pre-Raphaelite art, Sir Edward Burne-Jones, andDante Gabriel Rossetti and I wondered how their work would impact a young girl in the Victorian age. Well, Phoebe decided she lived in the later end of the age, but she admires them, nonetheless. The rest of the story came with her as she brought along her own art and take on the era.

Ans: I think you’d call Mortimer a beta hero. He is a watchmaker and (actually) an ex-thief. Thieving is a profession he gave up in his youth, when a generous watchmaker took him under his wing and showed him a better path.

(3)  Can you describe your heroine’s personality- title/rank?– description!

Ans: My heroine, Phoebe, is a spitfire. She is born to a man with ambitions to a higher class, which don’t jive with her own ambitions, to be an inventor. So you can imagine she and her parents butt heads now and then.

(4)  Are there secondary lead characters with important roles?

Ans: Yes, there is this one character who is the leader of the gang that is blackmailing Mortimer, but he has a double life as a gentleman. (It’s a bit of a spoiler so I don’t want to say which character I mean. J)

(6) What is it about your chosen era/periods that you most enjoy?

Ans: I like that it was just on the cusp of our modern world, that women were finally making some strides into roles that we here in modern day, now take for granted. It gave Phoebe a little more wiggle room than, say, setting it fifty years or so earlier. Not much, but some.

(7)  Which if any of your characters do you dislike, and why?

Ans: Grunel and Sykes! They’re just real…ahem, unlikeable guys. Grunel is just a sleeze and Sykes is a stuck up punk. I wrote him and I’d like to throttle him.

(8)  Do you avoid sex scenes, gross violence or other in your works?

Ans: In Watchmaker’s Heart, there are no graphic love scenes but there are hints in the background; as to violence, there are a few, slight fisticuffs here and there in this book. But it really depends on the story. I do tend to write more closed door love scenes overall, but some of my other books have plots that revolve around fantasy wars, for instance my Celtic Stewards Chronicles fantasy romance series is based on the Irish myth of the Battle of Mag Tuired, so there are various battle scenes involved and some closed door love scenes.

(9)  How would you rate your novel – historical fiction, romantic fiction, tear-jerker, emotional drama, swashbuckling adventure, or...?

Ans:WATCHMAKER’S HEART ishistorical romantic fiction with a little fantasy and a little humor, for good measure.

For Miss Phoebe Lockswell, fashionable London tea parties and balls aren’t her style. Instead, she prefers to tinker tirelessly with a clockwork diffuser she’s built from scratch. If only she can get the invention to work on command, she might earn her way out of an arranged marriage to a repugnant member of the House of Commons.
London watchmaker Mortimer Kidd was brought up hard in the arms of an infamous London gang. Despite the respectability he strives for now, the gang leader is blackmailing him. When Mortimer sees Phoebe’s diffuser, he thinks he’s found a way to buy himself out of trouble. The brash Phoebe manages to steal his heart, however, before he can purloin her invention.
Will Mortimer’s unsavory past catch up to him before he convinces Phoebe of his devotion? Worse, once Phoebe learns the truth, will she ever trust him again?

And Watchmaker’s Heart, of course, is available at Amazon:
http://amzn.com/B01CF0HOZG

Your readers can find my website and blog at:
http://julidrevezzo.com

Thank you for having me today, Francine!
Posted by Francine Howarth at 21:07 2 comments: