Writing With The Stars Blogfest - celeb not! 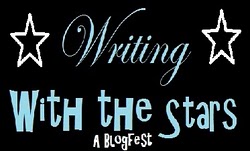 E. Elle is hosting this blogfest, and I'm happy to play along in stretching the old imagination!
So, ever the intrepid here's my contribution.
* * *﻿
Why, why had I agreed to enter into a reality TV show – mad or what?
Dream Wannabe Scriptwriter Challenge & Reality TV Show.
Write an episode for the Sharpe series.
The headline caught my eye, (Wow! Working with Sean Bean- it don't get better than that) and first sub heading suited me fine, but the little blighter below was so small it passed unnoticed:
Star in your own Sequence!

Anyhoo, I signed up and a few weeks later I had gotten through the interim stage with script presentation of a swashbuckling rescue scene. I was then invited to the studios where the reality show was to be staged, and that’s when the awful truth dawned!

There was no going back: I’d signed a contract. I was there, and the programme due to start the next day. I was going to be a STAR's side-kick: gulp!

Day 1: meet the lead actor and go over the script.

Easy peasy: or so I thought. 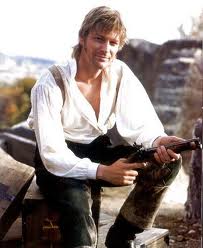 ﻿
To say I was tongue-tied would be understating the obvious. You know how it is when something delectable is put on the table in front of you and you can’t wrench your eyes away from it, and you start drooling (metaphorically). Well, I was drooling big time! How we got through the script, if we did, is still a blur.

Bearing in mind this was a reality TV show, my real-time phone-in rating dived!
It looked like I had to go some to get the public on my side, but there was always tomorrow

Day 2: dress rehearsal and run through of scene takes.

At some unearthly hour of the morning someone hammered on the door of my home from home, which I must say was a relatively luxurious tin box. Hence I turned over and buried my head in a pillow: the hammering by now, much louder. Jeez, what time did these people start work? The sun was barely showing its nose.

I had ten minutes to get out on set according to voice ‘tother side of the door.

I closed my eyes and must have dozed off again.

I woke to hammering on the door, and it resonated impatience, as did the voice: “Get out here, now”.

Oh hell. I was late.

I leapt out of bed and ran out on set.

﻿
Cheers erupted all around. I was popular, my real-time phone-in rating soared.

I fled back inside to get dressed. Girls from the costume department, hair and makeup let themselves in to my tin box boudoir, and apparently the schedule had changed. The dress rehearsal of scene takes had been changed to live shoot. Going by the gown she had in her arms, I envisaged the scene to be the one where I would walk gracefully into a ballroom fan to face. How wrong could I have been?

As soon as I stepped outside I just knew it was going to be one of those days, the sort of days an actor must dread.

This was not the scene take I had anticipated. A mock-up Palace had been set ablaze, a black pall of smoke darkening the sky. Before I could make a run for it, the star rode on set looking like he’d been dragged through the ashes of a bonfire, so this was definitely the rescue scene. Oh well, at least I was destined for an up close and personal with SB. Hee hee. 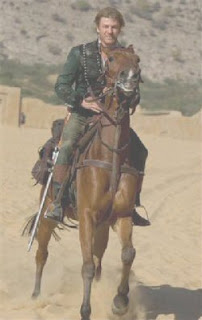 ﻿
SB reined in some distance away, and something about a chap holding a bucket of soot, and another bloke with bucket of something resembling ashes implied things were about to get messy for moi. How right I was, the contents of the buckets were showered over me! Then, some idiot with a massive fan (wind-maker) switched the damn thing on. The ordeal of being blasted was fleeting yet I felt I’d been to hell and back, and looked like I had, too. 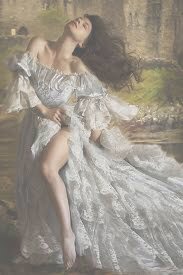 ﻿
By the time I’d regained my breath, the action scene was underway and I still a tad dazed from experience with the wind-maker. Next thing I’m hoisted in the air by one of the bucket-men, slung across the saddle of SB’s horse, and his hand on my arse as we sped past the blazing palace.

Scene shot over, the horse slowed to trot and thence to a halt and I slid off. I can tell you, once my feet hit solid ground I’d had it with this damn reality TV show. I walked away, thinking to hell with my real-time ratings, to hell with the chance of being a scriptwriter. I’m out of here, but . .. but something that happened in passing from saddle to ground left SB with a big grin on his face, and me a happy bunny, too.

Needless to say I was voted off the show for walking off set; index finger solidly aimed at the director and the jerk who'd created the "make-a-fool out of wannabe scriptwriters".

Sometimes nightmares can turn out better than reality, even if in the last few moments!

To read entries by other participants go here.
Posted by Francine Howarth at 10:37 6 comments: