Romantic Friday Writers hold weekly challenges. The base line being whatever the theme (named and prompts given) we can post up snippets from novels, ongoing WIPs, write a piece of Flash-Ficton or poetry. My contribution this week is a Flash-Fiction piece.  Maximum word count is 400.
The Prompt: "Fearful Heart." 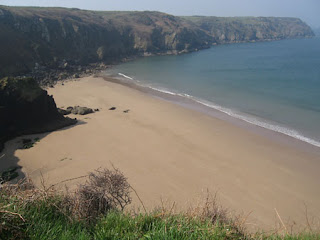 Jack had said he would be back before dawn, but a storm had blown in before dark and worsened over night. Waves taller than a house had crashed on the shore and pounded the headland. First light of dawn now streaked the horizon in ghostly pallor, and although the sea fallen calm and ebb tide barely lapping the sands she nevertheless walked the beach, her petticoats and skirt leaving a faint drag-trail.
It was all so unfair. Jack, who had survived the war, who’d returned home safe and in one piece, and now lost at sea. She could not fault his setting sail, for the man he had gone to warn of impending trouble had saved his life at Waterloo. But Billy was a smuggler, and someone had reported seeing lights out at Hart Point.
The local excise men and the militia had been out and about as soon as overnight winds had subsided. They’d already searched the creek and several coves the other side of the headland with lamps long before dawn.
If the militia had found man or boat or contraband on the beach they would have said, would have been overjoyed in proof of guilt whether men found dead or alive. But there was nothing bar for driftwood and seaweed scattered in heaps. The militia had moved on to the next cove, so why had she come to the beach? It was madness. Yet something kept pulling her toward the headland, to the cavern . . . The cavern.
She hitched up her skirts and ran and ran as if the very devil on her heels. The tide was not yet clear of the headland but she waded in to the sea, the chill of the water momentarily caused sharp intakes of breath. Soon waist deep, struggling to keep her balance, the entrance to the cavern lay within hands reach. She rounded the corner with difficulty, for pull of the tide on her skirts much like an anchor holding fast on a ship.
Fearful though her heart at finding nothing, a hand touched hers and a voice said, “So you do love me.”
She willingly succumbed to the salty tang of his commanding mouth on hers, and his tongue emulated promised pleasure already indulged in as man and wife.


To see entries by other members of RFW go here.
Posted by Francine Howarth at 22:59 19 comments: