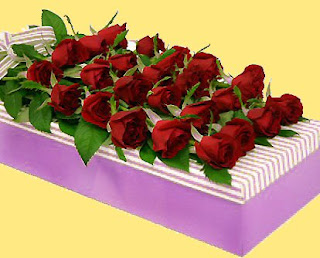 This week I've selected a snippet from a previously published novel: paired down to fit within word count of 400 max.
Brief: An awful lot of drama, angst and stark realisation between a bride and groom has preceded this snip, and things are not going according to plan for the big day. There is so much more to this piece, what with the bride's mum convinced the wedding is definitely off and already repacking wedding gifts, while the man of the house is convinced the florist's box is a peace offering from the bridegroom. I guess one could say it's a steamy hunt'n shoot'n rom-com, and believe it, the fires of lust are stoked big time when the cast attend a hunting weekend in the West Country.

398 words: code MPA.
The florist’s box lay on the kitchen table, and it was just like Suzanne to be late down for breakfast when such as this sitting and awaiting her personal attention. Were they from Phil? Was the wedding on again? Temptation kept eating away at Geraldine, and about to prise the lid enough to peep inside Suzanne burst through the door.
Nuance of guilt etched on her face Geraldine stepped back from the table, declared, “For you, according to the florist’s delivery girl.”
The suspense was unbearable, as Suzanne unravelled the ribbon and finally opened the box. “Wow,” she said, leaning forward, “and scented as well.”
“Twenty-four,” exclaimed Geraldine. My goodness, they must have cost . . .” She sensed air of trepidation: a little envelope now between fingers as Suzanne extricated a card from within. “Well?”
“I’ll stand them in water for a while,” said her daughter, heading for the sink with the box, “and arrange them after breakfast.”
Geraldine then knew Suzanne had no intention of revealing the identity of the sender, and it was obvious the wedding presents would have to be returned. She angled her head and strained her eyes to read the card:
Nelson. 11 a.m.
Two minutes to eleven. She was early when she had intended to be a few minutes late rather than appear too keen to meet him. There was no denying a spark had ignited mutual flames of desire, each knowing they would end up meeting like this. She kept walking, and spied him, his back to her as he scanned the square: one hand in grey suit pocket and rolled up magazine in free hand. He could hardly turn up in full dress cavalry uniform, as much as she would have liked that.
Talk dark and handsome her mother had said, and will make for a dashing best man. If only she knew how true those words. Once the intended best man, he now had the bride all to himself. The bridegroom was no better, and on a date with a stable girl.
Her heart double somersaulted as Nick swung round and glanced her way, for he immediately came striding across from his vantage point beneath Nelson’s column. Face lit with a smile, his hazel eyes laughed as he slipped one hand inside her unbuttoned coat and drew her close: his lingering kiss a silent hello.
To see entries by other participants go here.
Posted by Francine Howarth at 08:13 19 comments: