Book Review: The Treasures of Carmelidrium by N. R. Williams.

Book Blurb!
When a hooded man steps in front of her car, Missie is thrust through a portal into a medieval world where she encounters monsters and mythical creatures. Unbeknown to her, the playing of her flute casts magical powers to heal, destroy and to empower. Within the lands of Gil-Lael she's romanced by a prince and hunted by the villain. Will she find her way home? Does she want to? 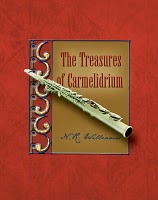 Book Review:
As fantasy epics go I’m a big fan of J. R.R.Tolkien’s “The Silmarillion” – “Lord of the Rings” and “The Hobbit”. So, it was with great interest that I selected Nancy’s book as one of seven to grace my new Kindle! As far as I could see Nancy was up against it, big time.

That said, Nancy's MC Michelle leads off and seems a nice enough girl with a promising musical talent for playing the flute. She’s obviously a tad wary of Professor Cloche (music tutor) who displays strange interest in her, which appears a little unhealthy. But, like a lot of good novel beginnings nothing is quite as it seems.

The pace picks up a little when Michelle sets off in her Jeep to drive home. Without spoiling the plot, something occurs that keeps a reader on the edge of their seat, and somehow Michelle (Missie) drives through a portal into another dimension. Although Michelle's nature is easy-going, she soon displays a more feisty spirit when the shock of her predicament wears off and reality kicks in.

I figured the moment Missie set eyes upon Healden, he had to be the hero within the mediaeval nether world she's unwittingly entered into. In my mind it was a case of, will Healden stand up to similar heroes such as Aragorn, Boromir and Legolos from “The Lord of the Rings”? Believe me, Healden is every bit the courageous warrior prince in “The Treasures of Carmelidrium” as aforementioned in “Lord of the Rings”. Needless to say Healden soon charms a reluctant Missie into his arms.

But of course, evil forces are at work. Renwyck, a dark lord whom holds power of psychic control over some nasty beasties, has it in mind to become King of this nether world. With his lust for supreme power comes overwhelming desire for the new woman in Healden’s life (Missie), for she holds the key to Renwyck’s possible downfall. Needless to say, kidnap and terrible doings not only lead to war Missie succumbs to Renwyck’s deceptive practices. Again, nothing is quite as it seems, and the author keeps the suspense ticking along as mysterious magic reveals future paths for Missie. Which one will she choose?

Throughout the novel, despite everything that happens, Missie’s desire is to secure a way back to her own world and return home. Or is it that her only desire? Strange as it may seem, there has to be a way back to her world because someone else left the nether world and has returned to once again be her mentor! It’s a lovely story with intimate moments between hero and heroine and, action packed kidnap and battle scenes. It's basically a darn good read.


To know how to get your mitts on this novel, pop over to Nancy's blog.
Posted by Francine Howarth at 12:26 10 comments: