Many thanks to Dawn for hosting this blogfest and for thinking up such a good subject.
To see entries by other participants go here.

The essence of this blogest is to paint a picture with words! I've still cheated with a couple of pics, but I just love old novels where pics were included: earlier books with etchings, and later colour prints. 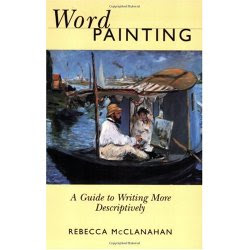 Brief: this is the opening scene to a re-union romance!

Cacophony of sound, milling people and overwhelming array of perfumes became intolerable. The stifling heat inside the marquee unbearable. She felt sick, quite sick. If she didn’t get out of there immediately she believed she might indeed throw up.


She hitched up the front of her bridesmaid gown and made a dash for the exit. A moment alone was all she needed, a moment of respite from the senses feeling as though bombarded with too much information. And of course those blue-grey eyes, those teasing eyes she’d thought never to see again, and that oh so damned handsome face.

As she stepped outside the vast canvas structure a lazy evening breeze whispered across her face. It was refreshingly cool as though chilled by the nearby ornamental lake and dark wooded island at its centre.

Musky scent of fern and fungi wafted on the ether, blotting out the heady aroma of manufactured perfumery.

The further she strolled away from the marquee and the noisy chatter the more remoteness enveloped, and her eyes readjusted to gentleness of twilight; movement of the air all the while teasing and ruffling the frills of her chiffon gown.

She strolled past tables and chairs arranged in groups on the lawn, where other wedding guests too had earlier sought respite from the oppressive atmosphere of the marquee. The elder fraternity had already retreated to the terrace at the mansion house. Its Tudor heritage as good as mocking the grotesque modern monstrosity ensconced on its emerald lawn, yet quietness of incoming night seeming to lull the ancient building into acceptance of temporary intrusion. 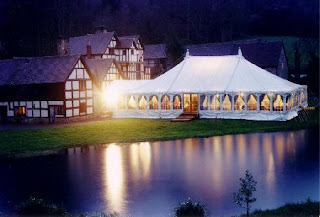 She paused inhaled sweet essence of wild flowers bordering the lakeside feeling happy in heart her best friend’s wedding had passed without untoward glitches to mar the day. The same could not be said for herself.

Why had she reacted so badly to kiss on bare shoulder?

She hadn’t seen Luc in eight months, and had had no idea he was standing in as best man, or that the bridegroom’s brother had fallen from his horse days beforehand and unable to carry out his official duties. Had Luc been present as mere guest, she could have avoided him so much easier. But no, he had to be in the bridal party.

One week of skiing together, a day of terror, and one night of passion and then . . .

Not that it was really his fault she’d run away from the horror and destruction of that terrible avalanche in Austria, nor the fearful nightmare that occurred that night. But, if he hadn’t said what he had the next evening she might have stayed on at least until the end of her holiday. Worse, the very morning she’d set out to leave the hotel, unseen, there he was returning from an early-morning ski run.

Caught in the act of running she’d felt embarrassed, and he’d just stood and watched her go without a word passing between them. What else had she expected?

Had he felt rejected and pride prevented him from making a move, or was it because he hadn’t given a damn that he’d tilted the axis of her singleton existence and stolen her heart?

She sensed a presence approaching from behind, half fearful it might be Luc, but it wasn’t.’

‘What are you doing out here all alone?’ enquired Sarah Gordon, fellow bridesmaid.

No way could Tori Bellamy bear to reveal true thoughts, and said, ‘Enjoying the evening air, that’s all.’ She drew a deep breath. ‘It’s an Indian summer, apparently, according to meteorologists at The Met Office, albeit the first day of October.’

‘What brought that to mind,’ enquired Sarah, laughing.

‘Cloudless sky of blue, all day, the sun now setting behind tree-covered island, people dancing to a romantic love song in floral bedecked marquee, and you ask what brought the weather to mind? Imagine what this lawn would be like if it had rained.’

‘I suppose I have to agree,’ batted Sarah, a wicked smirk, ‘but a marquee instead of a decent hotel for the reception?’

‘What could be better than the wedding in that gorgeous little church in the village, and then grand reception here at the manor house?’ mooted Tori.

‘Don’t be so prickly,’ said Sarah, fanning her face with a serviette. ‘Who was it moaned, earlier, about the temperature inside the marquee rising to tropical levels, heat wise?’

Tori smiled, glanced back at the marquee, noted guests rushing back from the house to the canvas interior. ‘At least the freelance-waiting staff are setting to with rolling up the lower sides now, so hopefully it’ll soon start cooling down a little.’

The chords of a romantic waltz reaching its finale drifted across the meadows.

‘Oh hell, and if we miss Paula’s throwing of the bouquet she’ll never forgive us,’ returned Tori, sense of queasiness having thankfully disappeared.

They both hitched up their skirts and ran.

Cooler air had already begun wafting through the marquee, and revelling in their freedom from official duties she and Sarah scooped up a glass of champagne as they passed a waiter with loaded tray.

As they sipped the pink champagne their attention centred on the happy couple dancing mid-floor, Sarah said, ‘Well, what a fantastic day it’s been, and Paula’s wedding dress is sooo her mother.’ She giggled a little. ‘I never thought all three of us would end up looking like extras for an epic American Civil War drama.’

‘Me neither,’ said Tori, ‘but hey, it’s only for one day, and Paula did warn us our gowns were somewhat frivolous and that we’d probably hate them when we finally got to see them.’

‘I suppose we should have guessed, being as Mrs Johnson’s all-time favourite movie is Gone With The Wind.’

Tori laughed. ‘And the men got off light with mere grey top hats and tails.’

Sarah nudged Tori’s elbow, and giggled. ‘Maybe, but Mrs J even got a blue-eyed dark-haired handsome Rhett Butler to turn up just for you.’

A long pause ensued, and at no response to mention of Rhett Butler, Sarah glanced at Tori, and asked, ‘It wasn’t all that bad, surely, his kissing you on the shoulder?’

Tori Bellamy agreed, the day had been perfect for their friend Paula’s big day, so too for the bride’s mum and dad, and for everyone else, but Luc kissing her shoulder was too much. 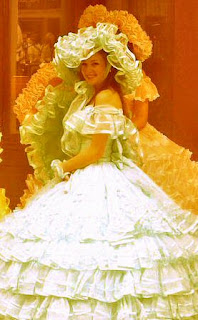 That's it - my contribution. It was taken from a novel of which I posted snippets from before, way back when I first set up the blog (a novel rejected by HM&B).
Posted by Francine Howarth at 09:25 24 comments: