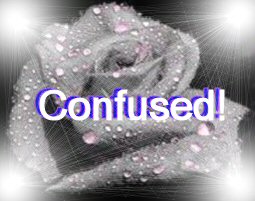 For this week's theme "Confused" I've snatched a snippet from my present WIP, a historical novella set in the period of the French Revolution.
Brief:  Half French by birth, Diamonta Whitaker, long-since returned from trip to France, has it in mind for a return visit. After all, she's received a letter from dear friend Angelica De Boviere, a lady-in-waiting to Marie Antoinette Queen of France. She's also received an invite to attend at the Court of Versailles for Christ's mass. How can she possibly refuse such an invite, but will her mother agree to her going once knowledge of Diamonta's interest in Angelica's brother comes to light? 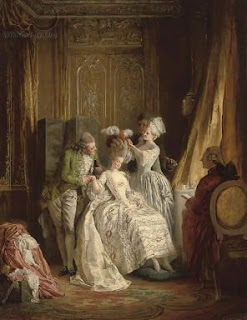 Word Count 400 +: MPA.
“There you are. I quite thought you all in the music room.” Rustle of silk implied great haste, her mother upon them so quick Charles barely managed to raise his rump from seat. “Sit down, dear boy.”
Charles fell back to chair. “What ails, dear lady? You have the look of news most important.”
“Viscount Somerton. I must speak with him.” Her mother glanced about them. “Please tell me Leohne has not imposed herself upon him.”
“Not in the least,” said Charles, a broad grin. “Blame Diamonta. It was her idea to foist our little sister upon Richard.” He inclined his head toward the lake. “They will return fairly soon, I shouldn’t wonder.”
“I did not foist Leohne upon the viscount, I merely suggested they go ahead while I assisted in Charles’ exercise.” How beautiful her mother was, when suspecting intrigue afoot.  Chloetilde DeRochers, a daughter of France who married below her station for love, embraced joy of step-son and would no doubt be enraptured to know her eldest daughter had eyes for a handsome young French count. “Does it matter, if Leohne has her heart set at Richard?”
Her mother grimaced but momentary, a smile slow to face, her dark brown eyes cast to the lakeside path visible here and there between trees. “I had thought your heart, Richard’s.”
“I am fond of him, it is true.”
“Ha,” blustered Charles. “Diamonta has her heart set on a . . .” He faltered, Diamonta held his gaze to prevent utterance of Frenchy. He gathered himself. “A count, and son of France.”
“Is this true?” Her mother glanced her way, eyebrow raised. “What is the name of this count?”
“It is Angelica’s brother, and  . . .”
“Ah, I see,” came forth as unaccountable dismissal. “A most unsuitable choice.”
Stunned and confused she could not muster words, words to extract explanation of her mother’s disregard for Francois. “I hardly know him,” her defence. “I’ve met him once only.”
“Just as well,” her mother’s curt response. “Good, I see them, now.”
Sense of relief at Leohne and Richard’s reappearance swept over her, for her mother would not press further on Francois and the way in which they had met, nor the time and place of their meeting. How glad she was to have refrained from telling her brother and sister all that had happened on her last venture to France. Perhaps there were things best kept secret, after all.
To see entries by other participants go here.
Posted by Francine Howarth at 08:27 19 comments: