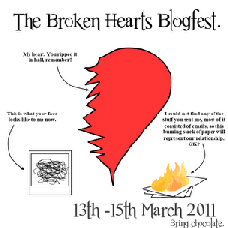 This blogfest is kindly hosted by the lovely Dawn Embers.
The task of this blogfest is to convey the essence of a broken heart!
Mine is a snippet from a historical in which the hero reveals inner thoughts. 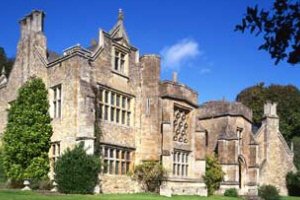 As he saddled up alongside his men, he could not deny he had hoped for something more than tentative friendship from Anna. Their time together nothing short of torture for him, and her seemingly as indifferent as ever. Today of his departing Axebury Hall served only to inflict sufferance of separation, while for Anna it would afford sense of freedom for she would have the run of the house as and when she pleased instead of hiding away in her chambers.

What more could he say or do to convince her he had no hand in his father’s death? If perchance he had had more time he might have won her round. Unfortunately, he had no choice but to answer to the call of duty, now that Bristol once again secure in Parliamentarian hands.

He simply could not ignore a message arrived from Lord Fairfax the day of yesterday requesting all troops in attendance as soon as able near to Abingdon, which had caused him to think an offensive likely upon Oxford and the King’s court amidst the spires of the hallowed colleges. With Prince Rupert long since defeated it was assumed Prince Charles to be with the King and all ensconced at Oxford. Nonetheless, he thought otherwise and had it in mind Prince Charles already made safe and out of the country. It was something Anna had said in passing, but when questioned had denied any knowledge of the Prince’ whereabouts.

Sure his saddle secure he mounted up, in his heart hoping this to be the final assault upon Royalist forces. The end to the damn war? He wanted nothing more than to return to Axebury Hall as mere lord and master, not as a soldier of the state. And, with a Parliamentarian head of household in residence the old place would be exempt from heavy taxes to be levied upon known Royalist households and properties, as deemed likely as soon as Parliament in full control of the country’s purse.

﻿
As he led off and out of the mews his men in his wake, with solemn heart he glanced up at Anna’s windows, for she had not come to wave him off or to exchange favourable words. He’d thought her warmed a little in his direction over the last few days, but obviously insufficient to grant him a fond farewell. It was her way of saying she had not forgiven him, though what needed forgiving he couldn’t imagine.

Nevertheless he had served her well in giving her access to her dowry, and who could say what might happen in the months to come. She might run off and get wed, as she had suggested, though he’d thought her outburst more taunt than intention. Throughout he had kept his father’s treacherous theft of her inheritance secret, just that, secret. He bore no desire to tarnish the image of her once shining knight, the man who had brought her as a child to Axebury and when grown a woman had desired in taking her to his bed.

Morton Lord Gantry loved Anna Lady Maitcliffe with all his heart, and if the time ever arose and he fell to her favour once again, he would gladly marry her and provide for her and expect nothing but love in return other than of at least one son and a bevy of beautiful daughters just like her. Destiny, though, might be against him as it had been since his return to Axebury. For War, ever the unpredictable beast, could shatter dreams and destroy lives as it had his and Anna’s with one strike of a sword. 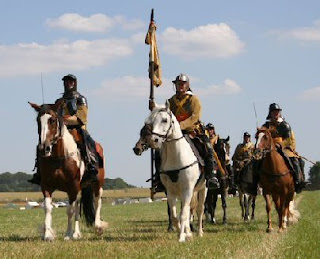 To see other participants entries go here and follow the Linky Tool at bottom of Dawn's post.